TPB Pick of The Week! | City of Others HC (10th Anniversary Edition) 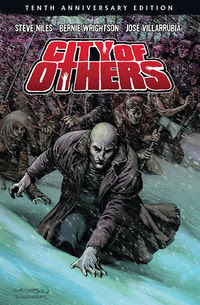 City of Others HC (10th Anniversary Edition) $29.99 Dark Horse Comics
A masterwork from two horror comics legends in a deluxe oversized edition! From the writer who created 30 Days of Night and the artist who created Swamp Thing comes a horror graphic novel like no other! Stosh Bludowski is a killer, born with the capacity for no apparent human emotion other than rage. Killing comes easy for Blud, and he makes a good living doing what's easy--until the day he meets two jobs in an alley who just won't die, and a grotesque mystery unfolds right in front of him. Soon, the remorseless killer is confronted by a reality he could never imagine, and he will be invited to make a decision once and for all: is he human, or is he Other?
Posted By nwcomicgames at 5:29 AM