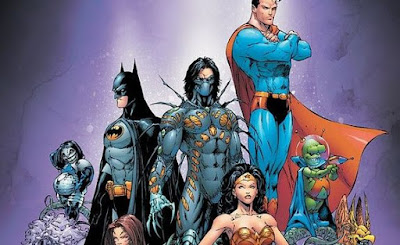 Rob Liefeld says that his fellow Image Comics founder (and current DC Chief Creative Officer/Co-Publisher) Jim Lee reached out to him recently for a unique crossover between DC and Image.

"So, a few weeks back, I get a call and some texts from Jim Lee, long story short, he asks if I'd be interested in bringing some of my Extreme characters over to DC Comics for a special that would come as soon as the end of this year where the Image characters team up in a bunch of short stories with DC comics characters," Liefeld posted on Facebook. "I said I'd consider it and that's it, nothing else, I assume as of this week, it was still in play."

DC has crossed over with Image on a few previous occasions, including Spawn/Batman and several crossovers with Top Cow's characters. And of course, DC bought Jim Lee's WildStorm imprint (once a part of Image) in 1999. Recently McFarlane signed an expansive toy/action figure deal with DC, and Jim Lee is announced as drawing something for Image's upcoming Spawn #300.
Why would Liefeld seemingly spoil the announcement of such an event? Good question.

"Because I simply didn't care about the affects one iota when I expressed that I think DC Comics should get new management," the writer/artist continued. "You see I'm a fan of all comics, I don't discriminate and there isn't a store in my county that hasn't seen me frequent their establishment looking for another comic book to purchase on a regular basis. I don't speak my mind nearly enough, we all used to talk more openly but everyone fears ramifications now."

"I'd just like a DC Comic company that reflects the one I grew up with, the one that produced Camelot 3000, Watchmen, Dark Knight, New Titans and I'm not intimidated, I'll express it," Liefeld posted. "That's just my opinion, I expressed it because I don't care the fallout. I don't care if there is an Image Comics/DC Comics special and I'm left out as a result. Like, seriously, get outta here with that!"
Posted By nwcomicgames at 10:47 AM