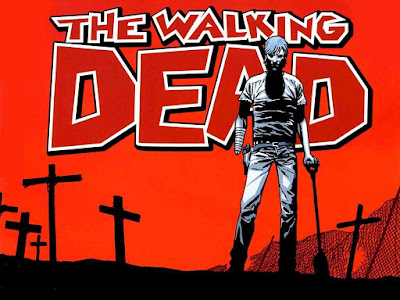 This story broke this afternoon as The Walking Dead will reportedly come to a surprise end with this week's #193 from writer Robert Kirkman and artist Charlie Adlard, according to Bleeding Cool.

Bleeding Cool reports that the 71-page The Walking Dead #193 will be the series' final issue, despite not having been solicited as such - and subsequent issues solicited for release in August and September.

"I’m upset, too. I’m going to miss it as much as you will, if not more so. It breaks my heart that I had to end it. and we have to move on but I just love this world too much to stretch things out until it doesn’t live up to what I want it to be," reads a purported partial statement from Kirkman. "I hope you understand. I hope you. dear reader, know how much I appreciate the gift you have given me. I got to tell my story exactly how I wanted to, for 193 issues, and end it on my terms, with no interference at all along the way… at any point. That’s such a rare thing, and it doesn’t exist without the unyielding support this series got from readers like you. Thank you so much."

"For a monthly comic book to progress and change the way The Walking Dead has is completely unique, and what’s more impressive is that it has done so for its entire 193-issue run without relaunching or rebooting," Stephenson told Bleeding Cool. "Robert Kirkman has told one story and told it well for over 15 years, and while most comics are based on the illusion of change, The Walking Dead has happened in real time – characters have ages from children to adults, they’ve lost limbs, they’ve lost eyes, they’ve lost family members and friends, they’ve died."

"Not 'died' in the nudge, nudge; wink, wink way that Superman, Captain America, and Wolverine 'died,' but in as real a manner as can happen in a fictional story. The series is concluding with the same finality and while that will no doubt be disappointing for some, in the big scheme of things, it’s a remarkable achievement for Robert and his collaborators."