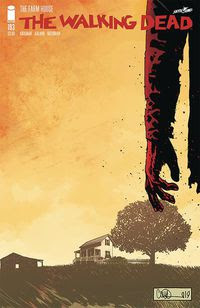 Walking Dead #193 $3.99 Image Comics (Series Finale)*
'THE FARMHOUSE': Out in the countryside, trouble is brewing for a certain someone.
*Note: Bleeding Cool reports that the 71-page The Walking Dead #193 will be the series' final issue, despite not having been solicited as such - and subsequent issues solicited for release in August and September.


"For a monthly comic book to progress and change the way The Walking Dead has is completely unique, and what’s more impressive is that it has done so for its entire 193-issue run without relaunching or rebooting," Stephenson told Bleeding Cool. "Robert Kirkman has told one story and told it well for over 15 years, and while most comics are based on the illusion of change, The Walking Dead has happened in real time – characters have ages from children to adults, they’ve lost limbs, they’ve lost eyes, they’ve lost family members and friends, they’ve died."

**Note: The price might be different! Email us your thoughts nwcomicsgames@gmail.com as this series has just stopped!
Posted By nwcomicgames at 5:26 AM