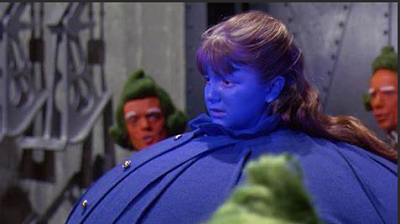 We're sad to report that Denise Nickerson, the former child star best known for her role as Violet Beauregarde in Willy Wonka & the Chocolate Factory, has passed away. Nickerson died on Wednesday night at the age of 62.

Nickerson's death was announced by her family in the late hours Wednesday, with a Facebook post that simply read, "She's gone." Her death came as a result of complications from a seizure and pneumonia. She was taken off life support Tuesday night.

The family had been keeping fans updated with Nickerson's medical condition over the last several days. Following the seizure, they started a GoFundMe campaign to help cover the medical bills.

"We've been up here with her most of the day and she's experienced multiple additional seizures", the GoFundMe page reads. "At 3 am (07/10/19) we decided because the machines and medicines are not helping her but only making her more uncomfortable, that it’s okay to stop administering these things to her. We are heartbroken and reliving a grief we've lived every single day since she had the stroke over a year ago.

"We don't know how much time she has. It could be minutes. It could be hours. But no matter what, she's already gone. We are sitting here with her just trying to keep her comfortable and let her know it's okay."
After starring in Willy Wonka & the Chocolate Factory at the age of 13, Nickerson went on to appear in Search for Tomorrow, The Electric Company, and The Brady Bunch. Nickerson eventually stepped away from acting altogether in 1978 to focus on a career in nursing.
Posted By nwcomicgames at 7:14 AM