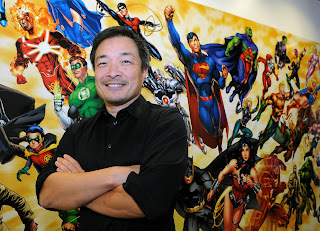 DC Co-Publisher/Chief Creative Office Jim Lee has opened up about the state of DC's digital comics offerings, including the publisher's DC Universe streaming service which hosts numerous original DC TV shows alongside a collection of DC comic books. According to Lee, DC Universe is thriving, while DC's individual digital comics are not doing as well. In fact, in Lee's words, DC's digital sales have "hit a wall."

"On the digital side, I think it’s been pretty flat in recent years, which is a little disheartening," Lee told ICv2 about plateauing digital comic book sales. "A lot is moving to subscription, and that is having a downward pressure on transactional sales. But I think it’s discouraging in general because everyone talks about digital being the future. If there’s anything that should continue to grow year-in, year-out, it should be that channel."

"The fact that it’s kind of plateaued and we’ve hit a wall speaks to a lot of different things," Lee continued. "We need to reinvent what we’re doing digitally. The subscription service that we’re doing on the DC Universe platform is part of that. We just have to get better at marketing to people that know our characters, love our characters, but aren’t buying comics."

As for what the plateau in digital sales means for the DC Universe service, Lee still sees DC Universe as the future of the publisher, with subscriptions remaining active and outpacing individual digital comic book sales.

"I think there’s always going to be room for a tool that allows us to engage directly with fans. That is the future, if I could borrow that line from digital," Lee said. "We have nothing really like it, so creating something that is the place where all DC fans can come together, buy, read, enjoy, connect, and communicate with or share community with one another is vital and important. We’re still going to have original content going through, but that slate is still being worked on. There’ll be announcements going forward."

When pressed if that original content would include more DC TV shows such as Titans and Doom Patrol in light of Warner Bros. impending launch of the HBO Max streaming service, which will incorporate Doom Patrol at least, Lee was more cagey about the prospect, focusing on speaking instead about the other aspects of DC Universe.

"Original content, and obviously a lot of people go on to watch the older material as well, the archived material, the library material," Lee explained. "That’s a big part of it. Then obviously the comics. There are a lot of readers that are just reading the comics as well, so it’s a great value proposition."

"We love being able to communicate directly with the fans, and so we’ve been building up the real life experiences and rewards that you get out of being a member," he continued. "It’s not just being able to watch what you want when you want, but actually coming to conventions like this and being able to go to activations, get behind-the-scenes tours, special products, meet-and-greets, all that kind of stuff."

In the interview, conducted prior to the announcement that Doom Patrol would come to HBO Max, Lee said it was "too early to say" how media might be shared between the two platforms.
Posted By nwcomicgames at 6:16 AM