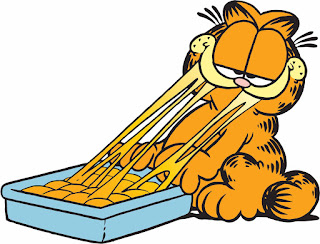 Yesterday, Viacom has signed a deal with Jim Davis for ownership of the comic strip character Garfield, according to Variety. Nickelodeon, a subsidiary of Viacom, is set to acquire Davis' Paws Inc., the company which holds rights to Garfield - as well as other Davis creations including U.S. Acres.

"I’m delighted that Garfield is going to be placed in the capable hands of the folks at Nick," said Davis in a statement. "They know how to entertain and will be great stewards for the franchise. I am also excited to continue to do the thing that gets me out of bed every morning…the comic strip!"

The 74-year-old cartoonist plans to continue work on the syndicated newspaper strip, with assistance from various writers and artists. The strip is syndicated through Universal Press Syndicate, with reprints and other original stories also published by BOOM! Studios, Random House, and Andrews McMeel.

"Garfield is a global evergreen franchise that is a natural fit with Nickelodeon and our portfolio of iconic properties," said Consumer Products Preisdent Pam Kaufman. "With fans around the globe that span both kids and adults, we are excited to ignite Garfield into a multi-generational consumer products juggernaut."

The financial terms of the deal were not disclosed, however Variety says Garfield generates "millions of dollars a year in merchandise alone."

Back in 2009, Viacom bought the Teenage Mutant Ninja Turtles from creators Peter Laird and Kevin Eastman. The Hollywood trade expects the agreement to close "in the upcoming weeks."
Posted By nwcomicgames at 6:25 AM