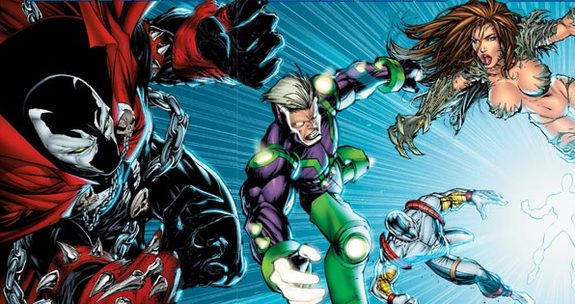 The epic-but-unfinished Image United crossover event was canceled midway through due to company co-founder and Spawn owner Todd McFarlane, at least according to fellow co-founder Rob Liefeld.

"Todd stopped working on it entirely, informed the rest of us he wasn’t going to contribute further. And it died," Liefeld tweeted, in response to a fan question about the project. "No chance whatsoever now that Youngblood is no longer with me or Image."

Launched in 2009, Image United was planned as a six-issue series featuring art from six of the seven Image Founders - Liefeld, McFarlane, Jim Valentino, Erik Larsen, Whilce Portacio, and Marc Silvestri - providing art, with the seventh founder, Jim Lee, creating covers. The story, written by Robert Kirkman, brought together characters created by each of the founders.
Posted By nwcomicgames at 6:16 AM