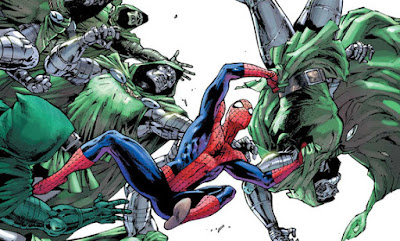 Tony S. Daniel has drawn covers for December's Amazing Spider-Man #35 and #36 - his first major work for Marvel Comics in over 20 years.

Daniel worked on Marvel's X-Force and Gambit & The X-Ternals in the mid-1990s with writer Fabian Nicieza. The Chicago-based artist segued to working at Image and then later DC for runs on Teen Titans, The Flash, Detective Comics, and Batman.

According to advance solicits, Daniel is continuing to work at DC - scheduled to draw December's Batman #85, the final issue of Tom King's run on the title.

Are you excited for this news?
Posted By nwcomicgames at 6:36 AM