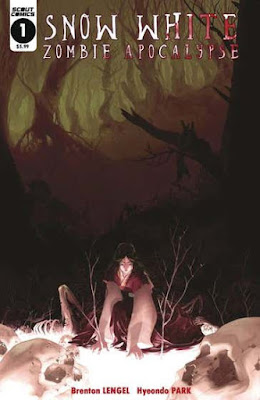 Snow White awakens to True Love's Kiss... twenty-eight days after the zombie apocalypse! With the Seven Dwarves dead, the quintessential fairytale princess must join forces with her polyamorous Prince Charming and his tough-as-nails paramour, Rapunzel, to wage a losing battle against death itself.

Bound by love and driven apart by jealousy, can this unlikely trio find a way to put aside their differences, or will they be devoured by the reanimated denizens of their once enchanted kingdom?

Based on the hit play by the same name, Snow White Zombie Apocalypse is a story of deep woods and old magic mixed with a healthy dollop of blood, sex, kung fu and gender politics.

Y'know, fairy tales as usual.
Posted By nwcomicgames at 6:13 AM