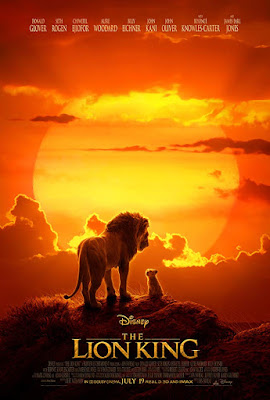 The Lion King (2019)
Language: English
Genre: Adventure/Comedy
MPAA Rating: PG
Director: Jon Favreau
Actors: Donald Glover, James Earl Jones, Beyoncé, Chiwetel Ejiofor, Seth Rogen, Billy Eichner
Plot: Combining live action and CGI, the re-imagining of the 1994 animated Disney classic follows the story of Simba, son of King Mufasa who goes from carefree cub to exiled ruler after his duplicitous uncle Scar kills his father and uses guilt to drive him out of his rightful kingdom, the Pridelands. Through leading an enjoyable life with the warthog Pumba and meerkat Timon, a chance encounter with childhood friend Nala makes him realize what dire straights his kingdom is in - and he returns to take his rightful place on the throne and return the Pridelands to its former glory.
Posted By nwcomicgames at 6:06 AM