TPB Pick of The Week | Flash Year One HC 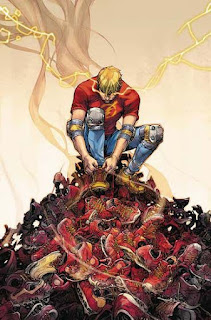 Flash Year One HC $24.99 DC Comics
Go back to the very beginning of Barry Allen's heroic journey in THE FLASH: YEAR ONE! Barry Allen feels helpless in his life in Central City. As a forensic scientist, he's always catching criminals after they've committed their crimes. All that changes one fateful night when Barry is struck by a bolt of lightning and doused in chemicals. When he wakes from a coma, he realizes he can run at incredible speeds. Can Barry master these powers and be the hero his city needs...or will the powers burn through him? Collects THE FLASH #70-75.
Posted By nwcomicgames at 7:04 AM