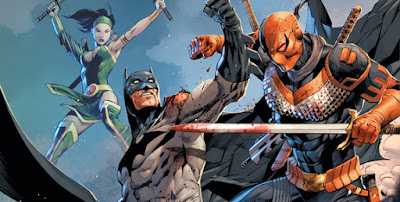 The fifth annual Jawiin Comic Drive for Service Members is underway, organizing donations of comic books and graphic novels to be sent to U.S. Armed Forces (and their families) overseas and in the United States.

Jason "Jawiin" Inman is once again organizing the event with Operation Gratitude, and this year they're partnering with the Los Angeles comic book store chain Collectors Paradise to serve as drop-off points in that area.

Inman is a U.S. Army veteran, who has gone on to work in the comic industry as a podcaster, DC Daily host, and writer. In the first four years of this drive, Inman has helped send 134,964 comic books to U.S. soldiers and their families.

Those interested in donating to the Jawiin Comic Drive for Service Member can drop it off at any Collectors Paradise location or mail them in now through November 30.

Collectors Paradise will be holding a kick-off event November 10 at their NoHo Arts District location, and those who donate 25 comics or more during that event will receive a free sketch from Bernard Chang, Norm Rapmund, Sherard Jackson, or Brian Lopez.

For details on the project including how to mail in your donations, visit www.comicdriveforservicemembers.com.
Posted By nwcomicgames at 9:25 AM