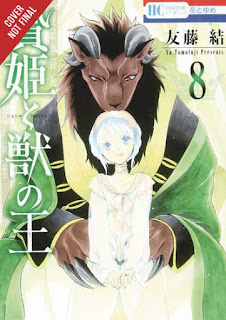 Sacrificial Princess & King Beasts GN Vol 08 $13.00 Yen Press
As Acting Queen, one of Sariphi's duties is to soothe and comfort the citizens of Ozmargo. Embarking on a journey for this purpose, Sariphi is joined by Randbert, the Captain of the Royal Bodyguards. Randbert's words and actions are anything but royal, and they shake everyone's faith in him...everyone besides Sariphi. But when Lord Brown, the local governor, is attacked, suspicion falls on Randbert. Will Sariphi's trust be enough to clear him? And after being separated from Leonhart for so long, what awaits Sariphi when they're reunited? For readers ages 13 years and up.
Posted By nwcomicgames at 6:23 AM