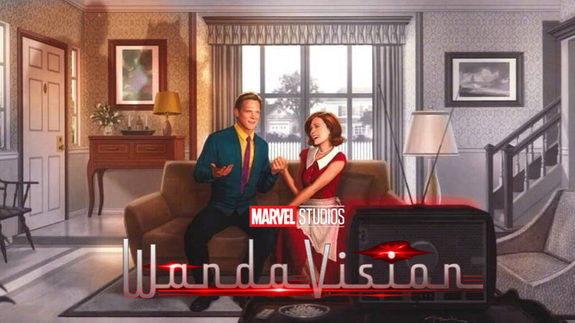 Yesterday, Disney+ rang in the New Year by dropping a "What's Coming to Disney+ in 2020" teaser trailer and in addition to the previously known second season of The Mandalorian and the first season of Marvel Studios' The Falcon and the Winter Soldier, the trailer revealed the surprise addition of the first season of WandaVision.

Starring Elizabeth Olsen and Paul Bettany reprising their roles as Wanda Maximoff and Vision, the series was originally announced as debuting in early 2021 and along with Loki (still expected in 2021) will lead directly into May 7, 2021's Doctor Strange in the Multiverse of Madness, which will co-star Olsen. MCU fans will now get to see the lead-in series a few months early.

WandaVision will blend the style of classic sitcoms with the Marvel Cinematic Universe in a series Marvel Studios describes as "two super-powered beings living their ideal suburban lives who begin to suspect that everything is not as it seems."
Posted By nwcomicgames at 6:13 AM