Marvel Comics' House of X/Powers of X, a hardcover collection of the two mini-series by Jonathan Hickman, Pepe Larraz, and R.B. Silva that heralded a revitalization of Marvel's mutant franchise, was the best-selling graphic novel of December and one of the publisher's four titles among the top ten. DC's Batman Volume 11: The Fall and the Fallen by Tom King and Mikel Janin led DC's slate of three titles in top ten at #2. Jeff Lemire, Dean Ormston, and Rich Tommasco's Black Hammer Volume 4: Age of Doom Part 2 from Dark Horse Comics ranked #5, and Garth Ennis and Darick Robertson's The Boys Omnibus Volume 6 from Dynamite Entertainment ranked #6. 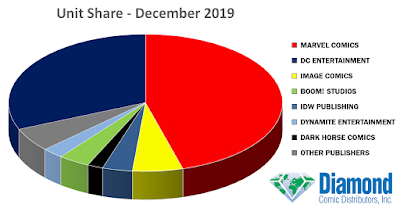 How does Diamond calculate the charts?

It all starts at the comic book shop.

Data for Diamond’s sales charts — which includes the monthly market shares and all top product charts — are compiled by Diamond Comic Distributors from sales made to thousands of comic book specialty shops located in North America and around the world. Additional sales made to online merchants and other specialty retailers may be included as well.

Unit and dollar market shares are calculated based upon orders for comic books, graphic novels, and magazines invoiced and shipped to Diamond customers during any given month, which comprises pre-orders, advance reorders, and reorders, minus any copies that are received back from a title marked as returnable. Please note that comics marked with an asterisk (*) have had their reported quantities reduced due to retailer returnability, and thus may rank lower on the charts than their actual sales would reflect.

The New Titles Count Chart includes all titles that were invoiced by Diamond to retailers for the first time during the month and is not the official solicited title count for the month. Variant edition comic books and graphic novels at the same price point count as a single SKU. Variant edition comic books, lenticular covers, digital combo packs, and graphic novels at different price points count as separate SKUs for each edition.
Posted By nwcomicgames at 7:46 AM