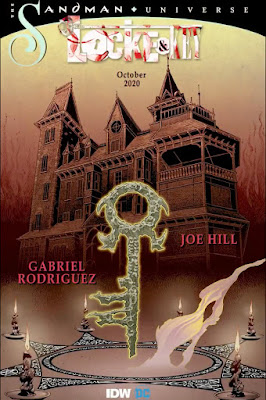 IDW and DC are teaming in October for a crossover of Joe Hill and Gabriel Rodriguez's Locke & Key and Neil Gaiman's Sandman universe in the appropriately titled Locke & Key: Hell & Gone - A Sandman Universe Crossover Event, by Hill and Rodriguez

Announced via Twitter by IDW this past Saturday morning, not much more is known about the crossover at this point.

Check out the announcement tweet below and stay tuned for more information as the publishers release it.

From Twitter:
If you think you can unlock the gates of hell and just invite yourself in, you must be dreaming. Coming October 2020: @joe_hill and @GR_comics will debut LOCKE & KEY: HELL & GONE - A SANDMAN UNIVERSE Crossover Event, courtesy of @IDWPublishing and @DCComics.
Posted By nwcomicgames at 5:10 AM