Two beloved and nostalgic toy franchises are crossing over this summer in a genre-bending, weekly comic book event. My Little Pony / Transformers a four-issue comic book event will launch May 6 from IDW Publishing and licensor Hasbro.

Framed by IDW as "the wildest crossover of Hasbro creations ever" (and they've had a few), My 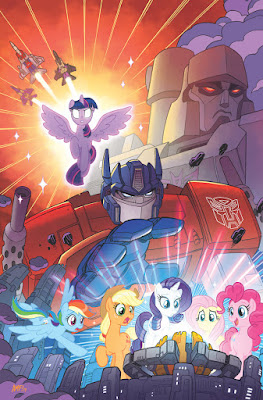 Little Pony / Transformers begins by way of a hacked Spacebridge bringing the iconic Robots in Disguise to Equestria.

"In My Little Pony / Transformers, the scheming Queen Chrysalis casts a spell in search of changeling allies, but accidentally interferes with a distant Cybertronian Spacebridge… and brings the Autobots and Decepticons to Equestria!" reads the publisher's description. "As the dust settles, it’s up to Twilight Sparkle, Optimus Prime, and others to overcome the menace of malevolent magic and machinery!"

“Teaming Transformers and My Little Pony has been a dream we’ve had for a long time," said IDW's Editor-in-Chief John Barber.

"We’re all really excited to see this mashup of characters by a mashup of creators who are honoring the legacy of both universes... and doing it in the most bonkers, fun way imaginable!"
Posted By nwcomicgames at 7:43 PM