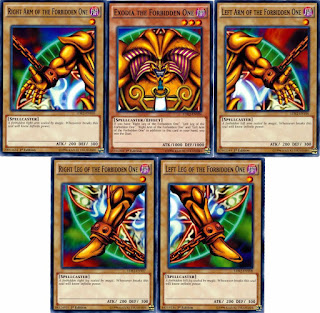 As the Yu-Gi-Oh! franchise celebrates its 20th Anniversary and prepares to launch the next era of its anime series later this Spring, fans have been taking this time to reflect on Kazuki Takahashi's original series. It's no secret now that the original incarnation of the series was much darker and involved real death games as the spirit of the Pharaoh continued to send criminals and other terrible people to the underworld as they lost the increasingly violent "shadow games." But once the "Magic and Wizards" card game was introduced, the entire franchise shifted in a whole new direction.

This was especially true for the anime as it broke its way to international fame with arguably the most memorable moment of the entire thing. As Yugi Muto found himself staring down three of Seto Kaiba's Blue-Eyes White Dragons, he believed in the "Heart of the Cards" so strongly that he was able to get the final piece of Exodia the Forbidden One and completely win the game.

In the series it was stated that putting all five pieces together had never been done before, and when the cards were thrown in the ocean it seemed like they were so rare Yugi would never be able to collect all of them again. But...is that really true. A new debate over their rarity has been hilariously sparked by Alascala8 on Reddit who spotted some random kid having a piece of the Forbidden One early on in the series.

This hilarious debate sparked from what is most likely just a production flub (that is both in the English dubbed and subbed release of the episode in question), but does raise a bunch of questions over the rarity of Exodia's pieces itself. The Rare Hunter had fake copies of the cards in the Battle City arc, and remains one of the few other uses of the Forbidden One in question. With Gods and the like introduced later, it's no mystery as to why this monster was only used once to prove Yugi's grandfather had no pathetic cards.
Posted By nwcomicgames at 7:48 PM