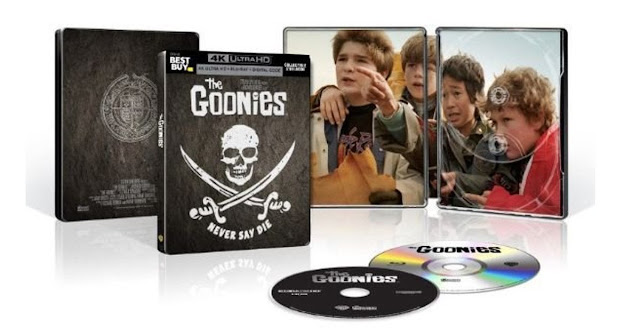 The Goonies probably won't see a sequel anytime soon, but true Goonies fans never say die. On the plus side, Richard Donner's classic adventure film is celebrating its 35th anniversary this year, and Warner Bros. is delivering a 4K Blu-ray to celebrate. If you happen to be one of those true Goonies fans, here's what you need to know...

In our opinion, if you're going to take the plunge an add The Goonies 4K / Digital Blu-ray to your collection, you might as well go for Best Buy's exclusive SteelBook edition, which is available to pre-order here for $29.99 with a release date slated for September 1st. It features a cool-looking version of The Goonies skull and crossbones "Never Say Die" on the front and a doubloon icon on the back.

The standard edition of The Goonies is currently available to pre-order here at Target for $24.99 and here at Walmart (they will eventually price match) which makes the SteelBook version even more attractive for only $5 more. Note that special feature information hasn't been released at the time of writing.

While you're at it, you might want to take a look at the new Jaws 45th anniversary 4K Blu-ray release, which also has a special Steelbook edition.
Posted By nwcomicgames at 6:23 AM