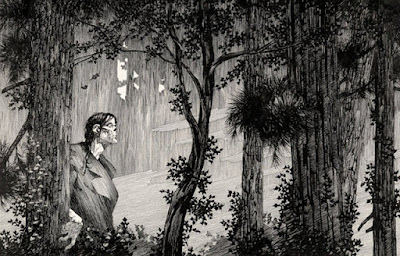 Wrightson’s original art for Mary Wollstonecraft Shelley’s Frankenstein is an absolute rarity. Starting in 1975, he spent six years creating images, and of the highly coveted published illustrations, only three of which are landscape format pieces (the wraparound cover and the back endpapers are the others). Wrightson is so revered for his work on the project that even the images he created that did not end up getting used in the book are in high demand among serious collectors.

This lot is prized for more than its rarity. It is a stellar example of Wrightson’s signature style, with incredibly effective shading through the use of close, thin lines and cross-hatching, effectively creating brightness and shadows. In this case, the image of the lonely monster helps to convey the mood of the entire tale.

“Part of the popularity of Bernie Wrightson’s work stems from the unbelievable amount of detail he works into his images,” Heritage Auctions Vice President Todd Hignite said. “Look at it closely and you’ll see the incredible number of lines he has in everything, whether it is the Frankenstein character, the trees around him or even the background. The amount of work he invested in this powerful image, which offers a glimpse into the monster’s soul, is part of why it is considered such a masterpiece.”

Wrightson is one of the most highly respected artists to ever work in comics and fantasy illustration, with his original artwork at the top of the list for scores of collectors — and Frankenstein is acknowledged as his absolute masterpiece. Such published originals, especially those prominently featuring the monster, are extremely rare on the market and highly prized by collectors.
Posted By nwcomicgames at 6:29 AM