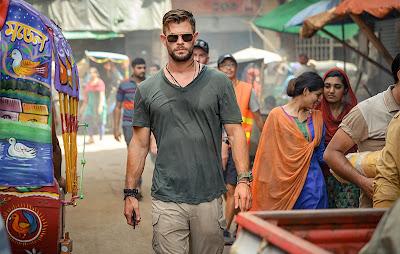 In an alternate universe, Chris Hemsworth would be in the middle of a far-flung publicity tour right now in support of the release of his new Netflix action film "Extraction," which is available for streaming Friday. Instead, on a recent afternoon, he found himself doing an interview over Zoom from his home in Australia, where he is in lockdown with his wife and three children, trying to find the silver lining in the situation.


"A week before we were about to leave, it was like, 'Maybe, maybe, maybe' — then all of the sudden it was like, 'No, we're not going anywhere,' " said the 36-year-old Hemsworth, who is no stranger to globe-trotting PR tours, having starred as the hammer-wielding superhero Thor in a series of Marvel Studios blockbusters. "But I wonder if we'll continue doing things this way in the future, because everyone gets to just do it from the comfort of their own home. You don't have to deal with jet lag."

Chris Hemsworth gets a chance to stretch his acting chops as a hardened mercenary hired to rescue the kidnapped son of a crime lord in Mumbai, India, in Extraction, a new original action thriller from Netflix. The film is produced by the Russo Brothers (Avengers: Infinity War, Avengers: End Game), which is probably how the film snagged Thor himself as the star. (We can probably thank Netflix for the cameo by David Harbour, of Stranger Things.)

(Some spoilers below, but no major reveals.)

The official premise is short and sweet: "Tyler Rake (Hemsworth) is a fearless black market 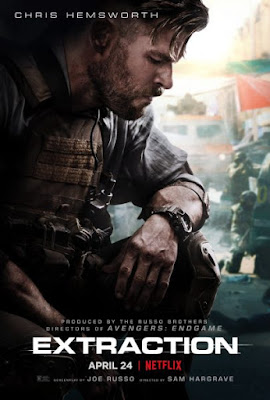 mercenary who embarks on the deadliest mission of his career when he’s enlisted to rescue the kidnapped son of an international crime lord."

Compounding matters is the fact that Rake has lost his own child and is dealing with the grief and depression one might expect from such a tragedy—namely, by drinking heavily, popping lots of oxycontin, and taking crazy-stupid risks. "You're hoping if you spin the chamber enough times, you'll catch a bullet," his perceptive fellow merc and partner, Nik Khan (Golshifteh Farahani), tells him.

The extraction of the kidnapped Ovi (played by newcomer Rudraksh Jaiswal), proves significantly more difficult than originally anticipated. Ovi's father is currently in prison, with his financial assets frozen. So when henchmen of Bangladeshi drug lord Amir Asif (Priyanshu Painyuli) kidnap Ovi, he can neither pay the ransom, nor the fee for hiring Tyler, Nik, and their crew. Instead, the crime lord's top aide, Saju (Randeep Hooda), tries to take Ovi back after Tyler completes the initial rescue to avoid paying him for the job.

Soon Asif has shut down the entire city of Dhaka to prevent Ovi's escape. In addition to the drug lord's forces, Tyler must battle local police and military forces in league with Asif to get Ovi across a bridge to (relative) safety. The odds are heavily against them. "That kid is a walking corpse," Harbour's Gaspar, a former teammate of Tyler's now living in Dhaka, tells him. "And there's no way to protect him. The best thing you could do for that kid would be to put a bullet in his brain."

There's much to like about Extraction, most notably the high-octane, beautifully choreographed action sequences, courtesy of Hargrave's hard-earned stunt expertise, in which Tyler channels his inner John Wick to even out the odds a bit. Thanks to a generous $65 million budget from Netflix, the production values are very high, on par with many theatrical releases, and while the plot is occasionally muddled, things move along at a brisk pace.

Hemsworth is more than capable of the physicality required to play Tyler and also brings the right amount of dark emotional intensity to his portrayal of the grief-stricken merc. He's supported by an equally strong cast, most notably Hooda's Saju and Jaiswal's Ovi, a shy, sensitive kid who just wants to hang out with his friends after school but instead finds himself fighting for his life.

That said, the film feels a bit thin. There isn't much in the way of surprising plot twists, and while there are nods at deeper emotional resonance—most notably a brief bonding moment between Tyler and Ovi while holed up in a temporary shelter—those quickly give way to another violent action sequence. Extraction is also unrelentingly grim. Granted, the John Wick franchise also leans into its dark themes and subject matter without apology. But ultimately Extraction just isn't having as much fun.

"The greatest thing that Netflix has done is take away box office from defining the success or quality of a film," Joe Russo told Deadline Hollywood in a recent interview. "Movies are having trouble being funded in the old way and models don't support it anymore." While he thinks there will always be a place for the communal experience of going to a movie theater, he thinks that will be reserved for big-budget blockbuster releases, where the economics are more favorable. Streaming services like Netflix can provide a much-needed platform for mid-level films like Extraction.

"Frankly I'm hoping the prejudice between digital and theatrical distribution disappears because I don't find it helpful," Joe Russo added. "And I don't think the audience, especially the young audience, cares. Some of the best quality storytelling we've ever had is on television right now through digital distribution." Well said.

Extraction is currently streaming on Netflix.
Posted By nwcomicgames at 6:20 AM