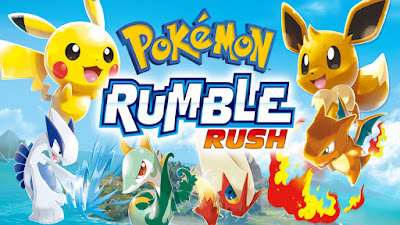 Pokemon Rumble Rush is ending, with all services ending in July. Earlier today, the Pokemon Company confirmed that its Pokemon Rumble Rush mobile game would cease service as of July 22nd, which means that the game will no longer be downloaded from mobile app stores. More importantly, existing players won't be able to play Pokemon Rumble Rush after July 22nd, as service and support for the game is ending entirely. As a part of the shutdown process, players will no longer be able to purchase diamonds from the in-game store and a refund for unused diamonds are being worked out.

But while the game continuously pushed new updates and events, it failed to really attract any large fanbase, which is why it shut down after just one year. Because of the game's odd use of event-only Pokemon and an emphasis on capturing stronger Pokemon instead of leveling up existing Pokemon, there was a definite grinding factor of the game without much of a reward. The writing for Pokemon Rumble Rush was seemingly on the wall when it started releasing event after event in a very short time period.

With the cancellation of Pokemon Rumble Rush, Pokemon's only current mobile game is Pokemon Go. Although Pokemon Sleep is still seemingly set to be released, the Pokemon Company has given no update about that mobile app since it was announced last year.

Players can still enjoy Pokemon Rumble Rush for a few more months. The game can still be downloaded on mobile devices through July 22nd.
Posted By nwcomicgames at 6:18 AM