After a nearly four-month hiatus, DC's flagship title Batman will be resuming its twice-monthly schedule June 9 when #92 hits shelves.

After previously announcing issues #92 and #93 would both be coming out in June, DC announced to retailers that the double-shipping schedule will continue "through 'The Joker War' and beyond." 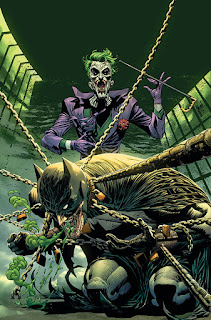 This time last year, DC announced that Tynion's Batman run would be released monthly, with Tom King's Batman/Catwoman to "fill the gap..."

When Tynion's Batman run began however, Batman/Catwoman wasn't scheduled alongside of it - and Batman continued its long-held twice-monthly schedule.

Prior to the comic industry hiatus brought on by the COVID-19 pandemic, Batman was solicited through #97.