Are you ready comic book fans?

Marvel is back in a big way for sure! 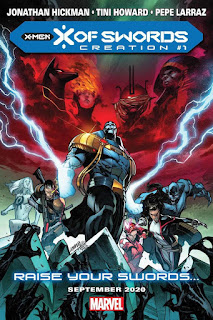 Marvel Comics has announced X of Swords: Creation #1, which kicks off the X-Men's next big crossover X of Swords in September.

The cover, seen here, shows some of the mutants who will wield ten powerful blades and bears the slogan "Raise your swords..."

X of Swords: Creation #1 is written by X of Swords (pronounced "Ten of Swords") writers Jonathan Hickman and Tini Howard with art and cover from Pepe Larraz.

X-Men line editor Jordan D. White spoke to Newsarama.com about what to expect from the event earlier this year, calling it the "craziest X-Men story ever." Hope your ready?!!!
Posted By nwcomicgames at 10:03 AM