DC is hinting at big things ahead for Harley Quinn – in fact, they're waving a hammer in our faces and promising it's gonna hit us with some big news regarding the Clown Princess of Crime some time 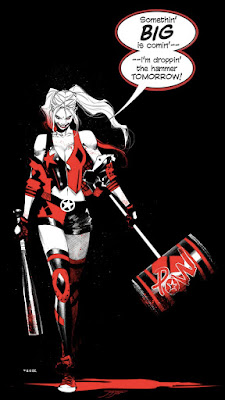 Harley Quinn is playing a major role in the upcoming Batman arc 'The Joker War' by writer James Tynion IV and Jimenez, which runs from Batman #95-100.

In this week's Batman #93, Harley Quinn already met the Joker's new henchwoman/moll Punchline, who ended up cutting her throat and leaving her for dead.
Posted By nwcomicgames at 5:57 AM