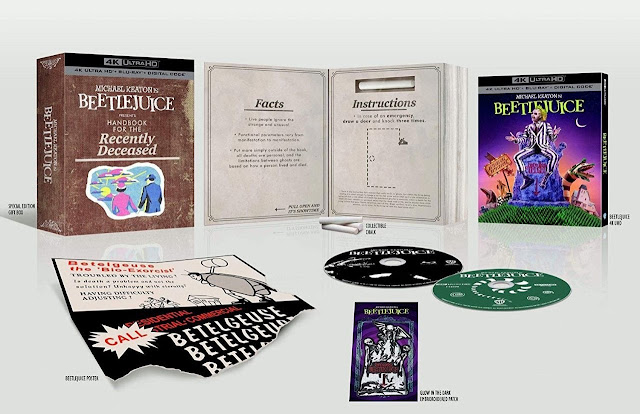 Yesterday, this story came out. Well, Tim Burton's beloved 1988 film Beetlejuice is finally coming to 4K Ultra HD, and super fans don't have to settle for the standard release. A collector's edition giftset has also been announced that includes The Handbook for the Recently Deceased (with... collectible chalk), a Beetlejuice poster, a glow in the dark embroidered patch, and special edition packaging.

The Beetlejuice 4K Blu-ray collector's edition gift set is an Amazon exclusive that you can pre-order right here for $49.99. You won't be charged until it ships, and you'll automatically get any discounts that occur during the pre-order period. Odds are this set will be discounted, so you'll be good to go when it happens.

The standard edition is available to pre-order here at Best Buy for $27.99. We wouldn't be surprised if Best Buy eventually gets an exclusive SteelBook edition since they always seem to launch one for big Blu-ray releases.
Posted By nwcomicgames at 6:16 AM