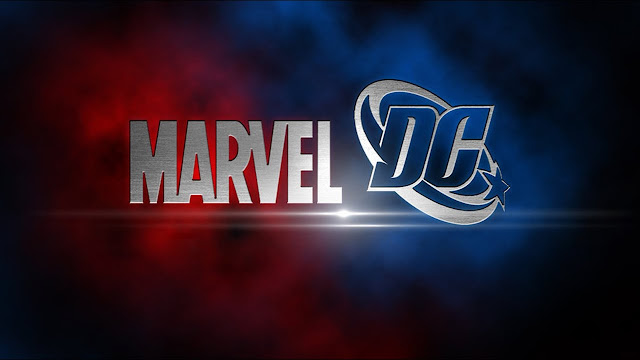 The "rivalry" between Marvel and DC Comics has haunted the nerd world for decades, with countless debates over which company is doing better in some way than the other. As both brands have ventured into movies and television, those comparisons have only grown and mutated more, whether in comparing Avengers: Infinity War to the theatrical cut of Justice League, or Wonder Woman to Captain Marvel.

One recurring sentiment among some has been that DC has a much weaker live-action output, especially up against the crowd-pleasing blockbuster tentpoles that have been released in the Marvel Cinematic Universe.

Many have wondered if and how DC would attempt to emulate the MCU's successful formula -- but if recent events like the confirmation of the "Snyder Cut" of Justice League or the news that Michael Keaton could return as Batman for The Flash movie are any indication, they appear to be taking things in an incredibly compelling, comic book-like direction.

Instead of trying to copy what has made the MCU work, DC's movies and TV shows seem to be laying the groundwork for something else entirely -- a live-action multiverse that prioritizes creativity, legacy, and genuine unpredictability over telling one massive franchise-wide story.

Oddly enough, Marvel and DC both began to suggest the existence of their film multiverses within the same half-year, albeit with wildly different results. The CW's "Crisis on Infinite Earths" crossover, which aired across five hours of TV this past December and January, completely shattered fans' expectations in hour four, when Grant Gustin and Ezra Miller's versions of Barry Allen/The Flash spontaneously shared the screen together.

The moment not only brought one of the DC fandom's wildest dreams to life, but it simultaneously confirmed that the main continuity of DC's films exists alongside The CW's Arrowverse, Stargirl, Doom Patrol, and countless other established properties. While the final hours of "Crisis" didn't (and couldn't) run through every confirmed Earth in the new multiverse, it essentially made a "the sky's the limit" argument that if there's a DC Comics story, it's probably a part of the multiverse in some way.

Meanwhile, just a handful of months before, the trailers for last summer's Spider-Man: Far From Home leaned heavily on the idea of Jake Gyllenhaal's Mysterio being from another Earth, a reveal that led fans to speculate wildly about what the MCU's multiverse-hopping future might hold. Ultimately, the reveal ended up being a fakeout in the film itself, as a way to justify Mysterio essentially popping out of nowhere to spread propaganda about Spider-Man.

Sure, the multiverse is expected to actually play a role in 2022's Doctor Strange in the Multiverse of Madness, but the way that the MCU has used the concept already indicates that it won't be nearly as comprehensive, and will still largely be rooted in the DNA of the main franchise (the speculation surrounding the canonizing of Sony films like Venom and Morbius already proves this).

This leads to another facet of DC's live-action multiverse that has already set itself apart from Marvel -- embracing the legacy of past adaptations. That feature was arguably one of the biggest selling points of the "Crisis" crossover, which featured cameos of characters from multiple veteran DC properties, including Batman '66, Smallville, and even the short-lived Birds of Prey TV show. The event even featured multiple generations of the same superhero in a single scene, between Brandon Routh and Tyler Hoechlin both suiting up as Superman, and John Wesley Shipp returning to his role as the 1990s The Flash to share a scene with Gustin.

The news that Keaton could be returning to play Batman in The Flash movie, after nearly three decades away from the character, indicates that that mindset isn't just a fluke, and that DC is more than willing to honor and canonize previous portrayals of a character. On the flip side, the MCU has been apprehensive about the idea of introducing another Steve Rogers or Tony Stark and is choosing to pass their superhero mantles on to other characters instead. Sure, some fans are hoping that we might eventually see Tobey Maguire, Andrew Garfield, and Tom Holland unite in a live-action Spider-Verse movie, but that idea still feels a ways away, and will ultimately feel a little less clever after multiple installments of the Into the Spider-Verse animated franchise.

The focus on a DC multiverse ultimately has another plus side as well, as it legitimizes and builds excitement towards every individual adaptation. While much of the MCU sets out to tell a story that will appeal to broad audiences, DC isn't afraid to cater to wildly different types of viewers, something that has been wildly apparent in its film and TV output.

This is arguably well-illustrated by the fact that Titans - an almost absurdly gritty DC Universe live-action series whose claim to fame was saying "F Batman" in its pilot episode - and Teen Titans GO! - a zany and genre-bending family-friendly cartoon with episodes about waffles and forgotten '80s jams - can coexist at the same exact time, and give viewers a completely different kind of appreciation for the same set of characters. (In a way, it's a lot like DC's approach to comics, where a character like Batman can simultaneously exist in all-ages books, as well as more adult-oriented fare where he displays full-frontal nudity.)

Regardless of whatever your diet of DC-inspired media is, there's a sense that you're going to be enjoying some sort of epic story that's worth watching, and that honors the characters that exist within it. When you juxtapose that to Marvel's oddly-disjointed film and TV outputs - with many fans feeling that projects like Netflix's Defenders shows and ABC's Agents of SHIELD don't "count" in the MCU anymore - it feels all the more jarring.

Sure, DC's film and TV outputs might be wildly different from each other -- but there has already proven to be a beauty and creative freedom to that. Just looking at the past year-and-a-half of films, the kind of stories DC is telling have varied wildly, from the nostalgic family-friendly story of Shazam! to the gritty, standalone Oscar bait of Joker to the candy-colored feminist thrill ride of Birds of Prey.

None of these films are remotely concerned with acknowledging each other or fitting into the same box, they're just concerned with telling the best possible version of their respective stories, and bringing in whatever audience members are drawn to their story. (And arguably, the fact that the wholesome Shazam! Family exists in the same world as Harley Quinn hitting cops with a bean bag gun arguably makes the universe richer.)

On the flip side, most installments in the MCU feel like an episode in a decade-long soap opera -- sure, fans might be excited to see what happens in each individual film or Disney+ series, but they're almost more eager to see how that installment will pepper in Easter eggs or post-credits scenes teasing what's to come. While that strategy is and has been admirable, the delays and production hurdles that have been brought about by the COVID-19 pandemic arguably show how easily that can crumble.

Meanwhile, DC has had to move around a handful of release dates due to the pandemic, but none of the projects affected completely break the entire franchise, or the TV shows currently airing -- because, thanks to the multiverse, everything is able to primarily stand on its own.

DC's approach to its live-action projects has been the butt of jokes for several years now, with some arguing that a lack of cohesion and a wide variety of tones among its film and TV adaptations are somehow a sign of failure. But there's a chance that that philosophy could be DC's biggest strength going forward, allowing for flexibility, creativity, and accessibility in the ever-evolving world of comic book adaptations.

While both Marvel and DC have a heck of a lot for movie and TV fans to look forward to in the years ahead, DC's approach to everything just might ultimately give it a major upper hand.
Posted By nwcomicgames at 6:03 AM