Mark Hamill is the gift that keeps on giving! The actor frequently shares behind-the-scenes facts and stories about the Star Wars on Twitter. This week, it was revealed that the actor known for playing Luke Skywalker had a secret role in Star Wars: The Mandalorian. In episode five, "The Gunslinger," he provided the voice of a droid in the Mos Eisley Cantina. In addition to playing Luke in Star Wars: The Rise of Skywalker, Hamill also voiced the alien known as Boolio. In a recent tweet, the actor shared he's had more cameos over the years than we realized.

“@HamillHimself had a secret voice cameo in The Mandalorian season 1 as the droid bartender EV-9D9, do you have more secrets Mark?,” @maka_gh asked. “Now that @themandalorian secret is out-might as well reveal I am vocally represented in ALL SW films except the Prequels. Thanks to
@matthewood for using me in Rogue One, Solo & the Sequels, so I DO have lines in #EpVII. Hint: Look for parts played by Patrick Williams. #TrueStory,” Hamill shared. 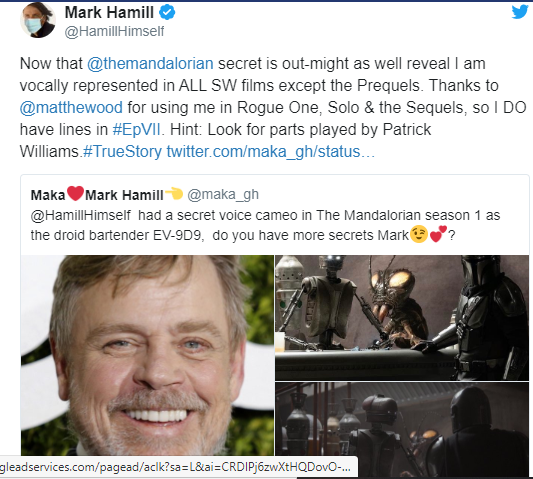 The Mandalorian probably won't be the last time Hamill provides a cameo in a Star Wars project, but it is very unlikely that we will ever see him play Luke Skywalker again in the franchise. While speaking with the Associated Press last year, Hamill did reveal that Star Wars: The Rise of Skywalker would probably his final appearance as Luke in Star Wars.

"I sure hope so," he replied with a laugh, before explaining why he wants to be done with the Skywalker Saga. "Well, because… I had closure in [The Last Jedi]. The fact that I’m involved in any capacity is only because of that peculiar aspect of the Star Wars mythology where if you’re a Jedi, you get to come back and make a curtain call as a Force ghost."
Posted By nwcomicgames at 6:08 AM