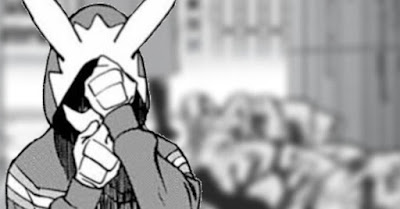 When the My Hero Academia franchise decides to kill off a character, it can still certainly shock fans with just how grisly each of these deaths can be. This is especially true for the rougher edged world of My Hero Academia: Vigilantes, which follows the young Koichi Haimawari as he takes on dangerous villains.

As the series approaches its final conflict, the fights are getting more perilous than ever as pro heroes are dropping left and right. It's been especially bloody now that the mysterious Number 6 has started to get into the fold himself.

The Pro Hero Compass (who has a quirk that points him toward anything he desires) had been working with Number 6 (who had been hiding out in his pro hero persona) in order to keep people safe from a rampaging "Pop Step," who had begun her attack in full. Which Koichi makes it to the scene and the pro heroes begin chasing after the vigilante, Number 6 puts a stop to them.

He figures out that the heroes are trying to corner Pop Step, and speeds up to the top of a building and shoots several of the heroes in the head. Compass figures out that these shootings mean another villain is near, and uses his quirk to point them out. But he points straight at Number 6. With Compass figuring out his identity, Number 6 picks up the pro hero -- mutates his right hand -- and brutally murders him.

The next thing we see is Number 6 triumphantly walking away as Compass' pointing finger has been bloodied and completely ripped away from the hero's body. There could be a chance that Compass simply had his arm torn off (which would be just as violent), but there's an even greater chance that Compass is simply a casualty caught in whatever devious plot Number 6 has in mind for Pop Step.
Posted By nwcomicgames at 6:12 AM