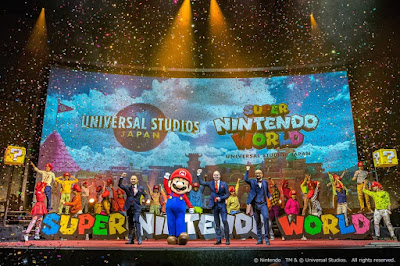 The upcoming Super Nintendo World at Universal Studios Japan has reportedly delayed its opening due to the ongoing COVID-19 pandemic. Thanks to several new videos and photos from the past month, it would appear that construction on the attractions is completed or nearly so, which means it could theoretically open whenever the company decides, and could therefore still be on track to do so later this year.

Citing sources familiar with the matter, Bloomberg states that the official delay could be announced as early as this week by Universal Studios Japan with the possibility that it will include details on when, exactly, it might actually open up. The opening had been timed to coincide around the 2020 Summer Olympics which were scheduled to occur in Tokyo this summer before the Olympics postponed until next year.

"It's a whole new separate area of the park. It's got food. It's got merchandise. The first phase will have two rides, Super Mario Kart ride as well as Yoshi's Adventures," Universal Parks & Resorts Chairman and CEO Tom Williams said last year after being asked about the new area and its attractions. "The whole land is interactive, and you're going to have a wristband. It's got the big red Mario symbol on it. It's -- by the way, the wristband is supercool. It's all magnetic. You slap it at your wrist, and it just snaps on, and it won't come off, [...] and you'll be able to go up and keep score and play with the various games, and that also translates to a score-keeping capability if you choose to do so within the rides and actually interfaces back with your game consoles. So you can build on it and come back again, and it's really got everything going on."

Super Nintendo World in Universal Studios Japan is seemingly still on track to open this year, though it has reportedly been delayed from the original Summer 2020 window thanks to the ongoing COVID-19 pandemic. It is expected to eventually launch as part of all Universal Studios theme parks sans Beijing.
Posted By nwcomicgames at 7:28 AM