Alien and Predator are coming to Marvel Comics

Yesterday, Marvel Comics has acquired the publishing licenses to create comic books based on the 20th Century Studios sci-fi/horror franchises Alien and Predator, as announced via IGN. 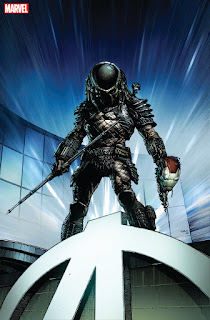 Though the publishing licenses are new to Marvel Comics, comic books based on Alien and Predator have been published for decades, primarily through Dark Horse, who held the licenses for Alien since 1988 and Predator since 1989.

Alongside the announcement, IGN premiered a pair of exclusive images of Alien's Xenomorph and Predator's titular alien hunter, both drawn by David Finch.

"Alien and Predator are the two of the most identifiable, iconic characters of all time, and I love them for that," Finch tells IGN. "But mostly, it’s being fortunate enough to be a kid when they were new. I’ve seen every movie they’ve ever been in, and I cannot wait to see them wreaking havoc in the Marvel Universe. I drew my pictures of them with a massive smile on my face."

Eagle-eyed fans will notice Predator perched on what appears to be Avengers Tower, implying the franchises could cross into the larger Marvel Universe as Conan has done since Marvel reacquired his license in 2019.

However, IGN states this is simply a marketing image not meant to indicate a crossover - Marvel similarly featured Conan with Marvel heroes when it announced the license for that franchise, however in that case Conan ultimately did crossover with Marvel's superheroes. 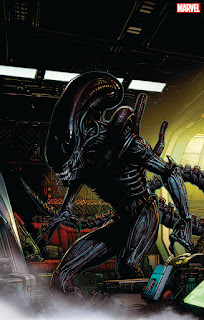 "There’s nothing more thrilling than a story that will keep you at the edge of your seat, and Alien and Predator have delivered that time and time again!" adds Marvel Editor-in-chief C.B. Cebulski.

"I can clearly remember where I was when I saw each of these modern masterpieces for the first time, and reveling in how both masterfully weave extraterrestrial dread and drama into some of the most iconic scenes we’ve ever seen on film.

"And it’s that legacy that we’re going to live up to! As a visual medium, comics are the perfect place to build on those moments, and we here at Marvel are honored to begin telling these stories for fans everywhere.

As our release schedule continues to return, we can’t wait to share more in the coming months!"

Posted By nwcomicgames at 6:47 AM