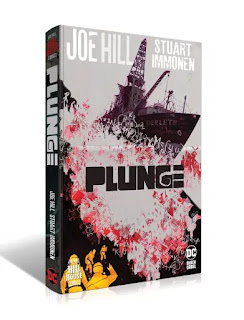 PLUNGE HC
written by JOE HILL
art by STUART IMMONEN
cover by JEREMY WILSON
ON SALE 11/17/20
$24.99 US | 168 PAGES | FC |
DC BLACK LABEL | AGES 17+
VELLUM DUST JACKET
ISBN: 978-1-77950-688-7
In the aftermath of a devastating tsunami, an exploration vessel known as the Derleth begins sending an automated distress signal from a remote atoll in the Bering Strait. The only problem is that the Derleth has been missing for 40 years. Marine biologist Moriah Lamb joins the Carpenter Wreck Removal team to recover the Derleth's dead...only to find that in this remote part of the Arctic Circle, the dead have plenty to say to the living…
There's something down in the icy darkness of the Arctic sea...something that doesn't want to be found. Unlike on land, where terror shows itself as the long-lost crew of the Derleth emerges from caves. They seem as though they haven't aged a day—it's as if they're exactly the same as the day they disappeared...except they're all missing their eyes. Will the salvage crew survive to bring their findings to shore? What danger waits for them if they fail? What dangers await us all should they succeed?
New York Times bestselling author Joe Hill and superstar artist Stuart Immonen team for the latest Hill House Comics horror epic!
Posted By nwcomicgames at 4:58 AM