Last week, in case you missed it, news broke... To celebrate the 35th anniversary of the release of the film franchise, IDW Publishing will cross the time-travel franchise over with Transformers for a four-issue limited series.

No stranger to crossing over its licensed comic books, IDW Publishing has previously crossed over 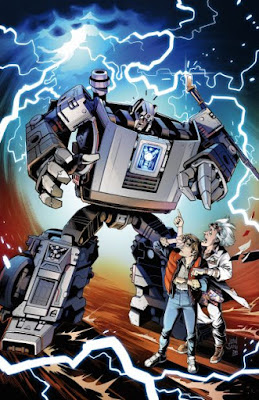 Transformers with G.I. Joe, Ghostbusters, and several other prominent franchises under IDW's banner.

In this case, the crossover will focus on a totally new Transformer with his own Back to the Future twist – he's based on a DeLorean, the same car that is turned into a time machine in Back to the Future, thanks to Doc Brown's Flux Capacitor device.

"Marty McFly has just returned to his home sweet home, Hill Valley 1985, and everything's looking up... that is, until Marty and his friend Doc Brown's time machine attracts the attention of the Decepticons!" reads IDW's description of the limited series.

"With one small mistake, Marty finds himself thrust into adventure to stop the Decepticon plot in the past, present, and future... all with the help of a new time machine: the Autobot, Gigawatt!"

In addition to appearing in the comic book limited series, Gigawatt – named after Doc Brown's famous "1.21 gigawatts!" exclamation from Back to the Future – will also receive his own Transformers action figure from Hasbro, available exclusively through Walmart.com and limited to 1,985 pieces. A later reissue through Hasbro Pulse is planned for October, with a variant color scheme.
Posted By nwcomicgames at 6:01 AM