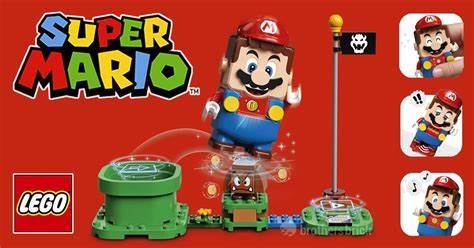 LEGO today has officially teased what appears to be a new set featuring the classic Nintendo Entertainment System in addition to a small television set.

Based on leaks that have also begun to come out, it would seem like we don't have long to wait until a full reveal as it is expected to launch on August 1st alongside the LEGO Super Mario line.

While LEGO itself has only officially unveiled a brief teaser video, which you can check out below, it's fairly obvious what it's showing in certain frames, and if you grab a screenshot to tinker with the contrast, it is even more clear.

Several leaked photos of the set have been circulating online as well, indicating that the set will include 2,646 pieces and sell for around $250. There also appears to be some clear interactivity between the new set and the Mario from the LEGO Super Mario Starter Course, though it is unclear exactly what combining the two might accomplish.

Our entire range – from the Starter Course to the Power Up Packs, through to the Expansion Sets and Character Packs – have been built to bring Super Mario, his friends – and his enemies – to life. We love how creative Nintendo and LEGO fans are, and can’t wait for them to unleash their imaginations in how they interact with Super Mario in the real world."

As of right now, there is no official word on when the LEGO Nintendo Entertainment System set might release or its price, though, as noted above, leaks peg both as August 1st and around $250. The LEGO Super Mario Adventures with Mario Starter Course is currently available to pre-order for $59.99.

The cost for the various expansion sets ranges from $19.99 to $99.99. The Power-up Packs run $9.99, and the Character Packs cost $4.99. The LEGO Super Mario line is set to launch on August 1st. You can check out all of our previous coverage of LEGO right here.

Posted By nwcomicgames at 5:59 AM