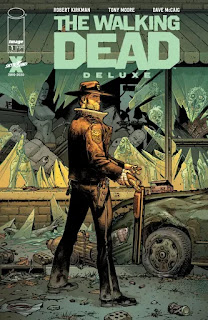 Robert Kirkman, Tony Moore, and Charlie Adlard's seminal zombie series The Walking Dead returns this October with new deluxe editions of all 193 issues - this time in full color and with bonus material.

Announced Saturday as part of the Skybound Xpo panel 'Skybound: Past, Present, and Future,' the reprint series The Walking Dead Deluxe will launch October 7 and then begin a twice-monthly release schedule in November.

Colorist Dave McCaig has been enlisted to color the original black-and-white series that was adapted into the smash hit AMC TV series, including re-coloring the original covers. Here's a look at pages from the first issue, now in glorious color:

Each issue will also include a section titled 'The Cutting Room Floor' featuring Kirkman's handwritten plots, commentary on abandoned storylines and plot points, and more.

In 2015, Image/Skybound published a volume of similar material also called The Cutting Room Floor; it's unclear if the material in the new colored series is repurposed from that book, or if it will be brand new to readers.
Posted By nwcomicgames at 6:19 AM