Hope everyone is staying safe out there! If you have a chance to head to the comic book store, checkout these title for your reading entertainment. 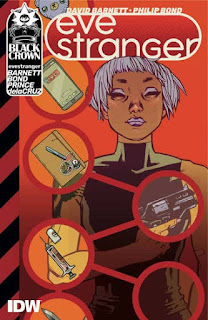 Eve Stranger TPB Vol 01 $17.99 IDW Publishing
You have unlimited funds, a jet-set lifestyle, and extraordinary abilities. So what happens when you develop a sneaking suspicion you're working for the bad guys? Meet Eve Stranger, amnesiac for hire. Eve wakes up in a hotel room without knowing who she is or how she got there. Beside her is a teddy bear, a credit card, a briefcase of cash, a used syringe, and a letter in her own handwriting that explains her next mission. She's living week by week, undertaking different, seemingly impossible tasks on behalf of a mystery benefactor. 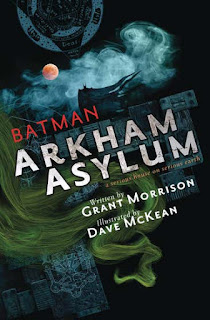 Batman Arkham Asylum New Edition TPB $19.99 DC Comics
One of the greatest Batman stories ever told, Batman: Arkham Asylum is back in a new edition of the classic hardcover! The inmates of Arkham Asylum have taken over and are demanding Batman in exchange for their hostages. Accepting their demented challenge, Batman is forced to endure the personal hells of The Joker, the Scarecrow, Poison Ivy, Two-Face, and many other sworn enemies in order to save the innocents and retake the asylum. Includes newly remastered artwork by Dave McKean, available for the first time in this format. 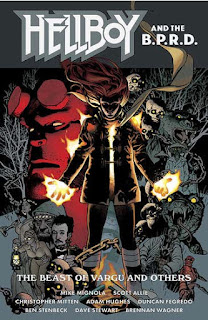 Hellboy and the B.P.R.D.: The Beast of Vargu and Others TPB $19.99 Dark Horse Comics
Face the mysterious Lambton Worm, track down an ancient corpse collector in the untamed wilderness, and more in this collection of monster meet-ups! Some of Hellboy's most notorious exploits, including the story of Eisner Award-winning one-shot Hellboy: Krampusnacht, await in this new short story collection! Mike Mignola and Scott Allie are joined by veteran Hellboy artists Ben Stenbeck, Adam Hughes, Christopher Mitten, and Duncan Fegredo to present stories collected for the first time in paperback, complete with bonus sketchbook section.

Posted By nwcomicgames at 5:55 AM