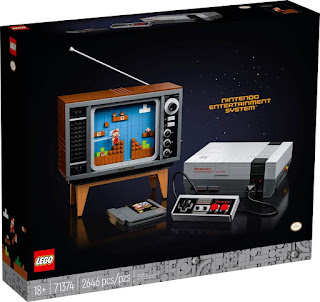 After first teasing the existence of it yesterday, LEGO has today announced the LEGO Nintendo Entertainment System Building Kit, a fantastic-looking set that includes a LEGO NES and controller as well as a retro-style television set. As expected, it features 2,646 pieces and includes an action brick that allows the LEGO Mario from the LEGO Super Mario line to interact with it. The new set is scheduled to launch August 1st alongside the rest of the LEGO Super Mario product line and will retail for $299.99.

"Super Mario has been a cherished figure in the gaming world for over thirty years now," said Maarten Simons, Creative Lead on LEGO Nintendo Entertainment System, the LEGO Group, as part of today's announcement. "Many adults still fondly remember that first time they saw Mario leap across the small screen, even if the graphics were a lot simpler than they are today. With the LEGO Nintendo Entertainment System, we’re letting them truly indulge in that nostalgia, recreating one of the most-loved consoles of all time so they can see the Super Mario from their childhoods once again – and even to share the experience of gaming in the 1980s with their own children."
Posted By nwcomicgames at 5:57 AM