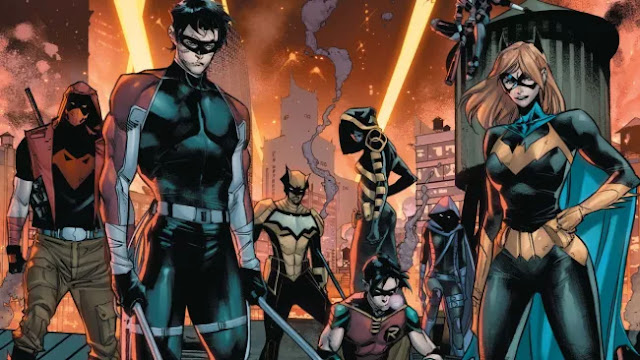 It may say 'Batman' on the cover, but September 15's Batman #99 will remind fans that DC's Dark Knight has an entire family of superheroes supporting him.

Red Hood, Nightwing, the Signal, Orphan, Robin, Batgirl, Harley Quinn, and Batwoman have arrived to help Bruce and Catwoman in their war against the Joker and his lackeys.

"Things have changed, as Batman realizes he can't fight this war alone," reads DC's synopsis of the issue. "He's going to need help. Before he faces down the Joker, he must call up his trusty partner Dick Grayson! But can Dick reclaim his lost memories in time to join the battle?"

This is the Batman title's penultimate chapter of the current 'The Joker War' crossover event, written by James Tynion IV and drawn by Jorge Jimenez.

The Bat-family will be a big part of the final installments of 'The Joker War', as well as the DC line going forward according to Tynion.

"... anyone who knows my work in and around Gotham knows how much I care about the Batman family characters - and getting these characters in position to set the stage for a very, very rich Gotham City that we’ll be telling stories in, in 2021,"
Posted By nwcomicgames at 6:09 AM