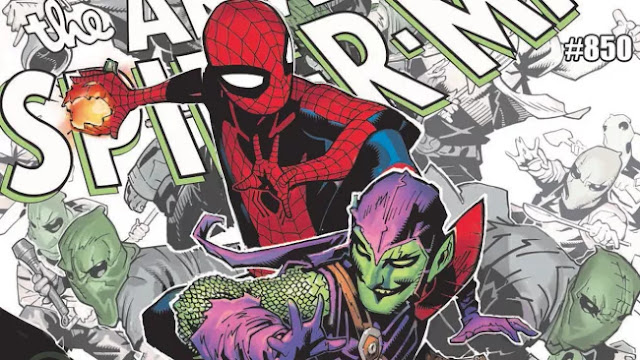 Yesterday, Newsarama was first to report this story. As Bachalo's variant cover for the legacy numbered #850. Bachalo is also slated to draw one of several stories in this over-sized special.

Here's a collection of all of the covers released thus far - the primary cover by Mark Bagley, and variants by Nick Bradshaw, Mahmud Asrar, Olivier Coipel, Bruce Timm, Humberto Ramos, and Bachalo.

Described as a "climactic chapter in the wall crawler's years-long conflict with the Goblin-masked madman," this issue is framed as a "colossal showdown" by Marvel.

"Spidey has faced his share of hardships, but even the worst things that have happened to him are just a prelude to what transpires here," the issue's solicitation reads.

"This is maybe the most action-packed and harrowing issue of Amazing Spider-Man ever!" Marvel's executive editor Nick Lowe said previously about the issue. "There are so many twists and turns and Spidey has never had his back up against a wall like this before."

Amazing Spider-Man #850 goes on sale September 22 once more!
Posted By nwcomicgames at 6:13 AM