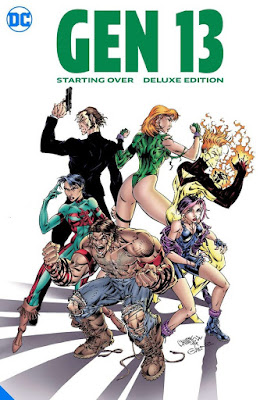 Wildstorm's Gen 13, which debuted as a massive hit and helped shape the '90s comics marketplace, is coming back into print, at least in part, with a new Deluxe Edition hardcover of much of J. Scott Campbell's run on the series due in 2021.

Despite its success -- and bestselling crossovers with Superman, Spider-Man, The Maxx, and others -- Gen 13 has been largely sidelined since DC shuttered the WildStorm imprint around the launch of The New 52 in 2011. Characters from the comic appeared in some New 52 titles, but have since vanished from the DC Universe again, and Gen 13 is not even available digitally.

The new volume, Gen 13: Starting Over, will reportedly hit store shelves in May of 2021. It will be a reprinting of a previous collected edition released in 2002, but with new trade dress and a new cover.

The new cover, though, won't mark new artwork. It's repurposed from Gen 13 #5 by Campbell and Alex Garner.

Like many WildStorm properties, Gen 13 was originally created while Jim Lee and the WildStorm imprint were at Image Comics. Lee was a founding partner at Image, and the structure of the company was such that each partner had their own studio and maintained full ownership of it. In 1999, Lee sold his studio to DC Comics in exchange for not just a payout, but a role at DC. At the time, he said that he was tired of being a manager and wanted to be an artist again. Ironically, Lee has been one of DC's top executives, and responsible for making managerial decisions over a larger and more demanding corporation than his own ever was, for years.
Posted By nwcomicgames at 7:05 AM