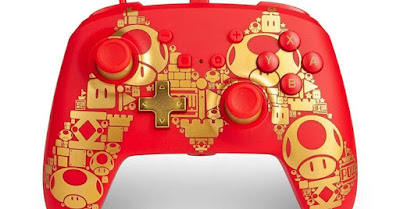 The Nintendo Switch will be getting a pair of new controllers based on Mario. The first of these controllers comes from Power A, a company that should be familiar to many Switch owners. Power A has released a number of officially licensed controllers throughout the system's lifespan. The newest enhanced wireless controller will feature a red coloration, and a golden "M" made-up of the franchise's various items and power-ups (See on Amazon - $24.99). The second comes from HORI, and is actually targeted towards younger players. The HORIPAD Mini (See on Amazon - $24.99) is a smaller controller that should be perfect for those with smaller hands.

Given the all-ages nature of the Mario franchise, it seems quite fitting that Power A and HORI are releasing Mario products aimed at both the older and younger audiences. The mustachioed plumber has always been a hit with families, and these two controllers should be perfect for parents and children looking to sit down together with games like New Super Mario Bros. U Deluxe.

This year marks the 35th anniversary of Super Mario Bros. Last month saw the release of Paper Mario: The Origami King, but rumors have been swirling about another Mario game set to release this year. The game will apparently be a compilation of 3D Mario classics, including Super Mario 64, Super Mario Sunshine, and Super Mario Galaxy. As of this writing, Nintendo has not made any kind of official announcement, but earlier this month, the company released a new image of Mario lounging on the beach. It's possible that the image was just Nintendo's way of celebrating the summer, but many fans immediately looked at it as a tease for Super Mario Sunshine's return!

Regardless of what else gets released this year, it seems that both HORI and Power A's new controllers should be the perfect thing for Mario fans. The HORIPAD Mini will release on September 1st, while the Power A controller will be available on September 4th. Both controllers will retail for $24.99.
Posted By nwcomicgames at 6:13 AM