The pandemic didn't stop Joe Kelly and Chris Bachalo's reunion with the announced Non-Stop Spider-Man - it only delayed it. Originally announced for a June 2020 debut, the new ongoing series will now debut in January 2021. 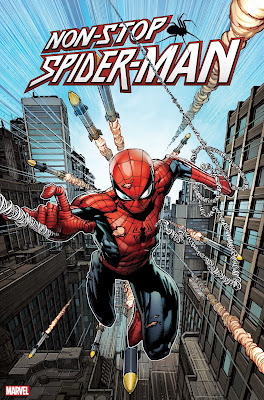 "Non-Stop Spider-Man is, for me, the best of what Marvel comics can be: relentless action, epic storytelling, mind-melting art, and relevant themes, all grounded by the heart and soul of one of my all-time favorite characters, Spider-Man," Kelly said back in February when the book was originally announced. "Chris and I want to redline your adrenaline and shatter your hearts, giggling the whole time. Please sign your waivers and gather your safety gear of choice before issue one comes out. I truly can't wait for this. Buckle up, Tigers."

Kelly and Bachalo have a long history together, some of it with Spider-Man. They first worked together in 1998 for Uncanny X-Men, then the duo reteamed on the creator-owned series Steampunk for DC/Wildstorm. Then after each having individual runs with Spider-Man, the two reunited again in 2008 and 2009 during Amazing Spider-Man's 'Brand New Day' era.

Bachalo calls Spider-Man his favorite character to draw ever, and Joe Kelly his favorite writer to work with - so it's a perfect match for the artist.

We're excited!
Posted By nwcomicgames at 11:15 AM