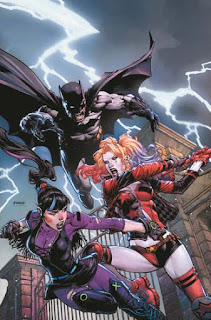 Batman #98 Joker War $3.99 DC Comics
“The Joker War” part four of six! Batman is at his most vulnerable following a massive dose of an experimental new Joker toxin. With the Dark Knight haunted by demons and visions, it’s up to Harley Quinn to protect him while he recovers—because Punchline is on her way!
Posted By nwcomicgames at 5:15 AM