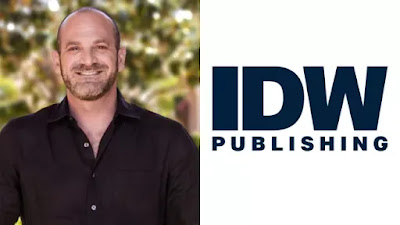 "IDW Publishing has parted ways with Jud Meyers and would like to thank everyone for their discretion," reads the publisher's brief statement on Meyers' termination.

Meyers' termination comes 16 days after his promotion to publisher was announced. Five days after that promotion, he was placed on administrative leave.

IDW has not announced whether Bennington, who was promoted alongside Meyers, will continue in the role of publisher or if a replacement has been or will be hired.

Meyers moved into the role following the departure of longtime president/publisher/chief creative officer Chris Ryall, with Ryall's roles being split up.

"To say that the shoes we'll be stepping into will be hard to fill is the mother of all understatements," Meyers tweeted on July 22 after the promotions were announced.

In the press release announcing his promotion, IDW described the publisher position as overseeing "all aspects of production and publication" of IDW's comics.

Meyers joined IDW in August 2019 as global sales director, following a short stint in a similar position at Humanoids.

Prior to that, Meyers had a long track record as a comics retailer, working for Forbidden Planet in London, consulting in Virgin Megastore UK's first comic store, managing (and co-owning) Earth-2 Comics in Los Angeles, and later co-founding an L.A. comic store named Blastoff Comics.

IDW has not commented on the reason for Meyers' administrative leave or subsequent termination.
Posted By nwcomicgames at 5:28 AM