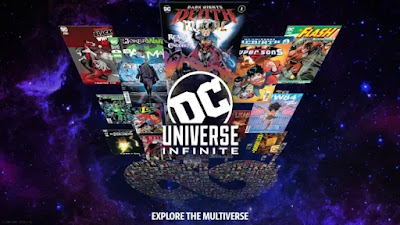 The DC Universe streaming service will be rebranded in 2021 as 'DC Universe Infinite,' with a focus exclusively on comic books - with the TV and film content the service has accumulated the past two years becoming exclusive to the recently-launched HBO Max streaming service.

All of the comics will also be downloadable for offline reading as well.

"Our fans love the platform's robust library of comic books and, with the transformation, we will not disappoint," DC publisher/chief creative officer Jim Lee says with the announcement. "I'm excited to share that not only will DC Universe Infinite members still be able to read all of the great comics that they've enjoyed but new issues are debuting on the platform quicker than before, digital first exclusives are being created, and the members-only events will begin as soon as possible. There has never been a better time to be a DC fan!"

DC Universe Infinite is scheduled to launch January 21, 2021, with plans for an international rollout in summer 2021.

The DC Universe Infinite service will have "more than 24,000 comics at launch…" On the surface, that's not much more than the current DC Universe service, which broke 23,000 comics back on May 12.

DC Universe Infinite will also keep the DC Universe community section alive, and make it available even to the general public without a subscription.

For those that signed up to DC Universe for the video content, HBO Max has a special price of $4.99/month available now through October 20.