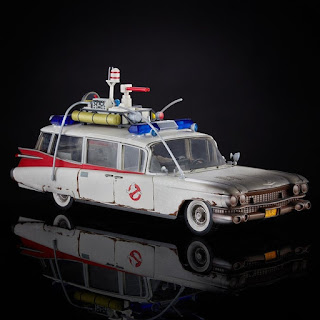 Hasbro's first-ever PulseCon has already delivered a multitude of announcements and reveals from many beloved properties, including Power Rangers, Star Wars, Marvel, G.I. Joe, and Ghostbusters, just to name a few. Speaking of Ghostbusters, as part of its Ghostbusters celebration the team at Hasbro got together with Ghostbusters: Afterlife director Jason Reitman to talk all about the upcoming film, but they also had something cool to reveal, which turned out to be the Plasma Series Ecto-1, and we've got your exclusive first look at stylish 1/18th scale collectible starting on the next slide, which is coming exclusively to Target.
You can pre-order the Plasma Series Ecto-1 from Target right here, and you can also pre-order all of the other big reveals from PulseCon right here. You can check out the official description below.
(Ages 14 and Up / Approx. Retail Price: $49.99 / Available: January 1, 2021)
GHOSTBUSTERS PLASMA SERIES ECTO-1
Commemorate the next chapter in the Ghostbusters story, GHOSTBUSTERS: Afterlife, with the GHOSTBUSTERS PLASMA SERIES ECTO-1 1/18th-scale collectible of the iconic Ecto-1 vehicle from Hasbro. Featured in the all-new GHOSTBUSTERS: Afterlife movie, this collectible features premium deco with incredible detailing inspired by the updated look of the new Ecto-1 as seen in the 2021 movie. The GHOSTBUSTERS PLASMA SERIES ECTO-1 collectible also features opening doors, movable pieces, and more features inspired by the movie. Available exclusively at Target.
Part 1: Classic Ghostbusters
Panelists: Ernie Hudson, Hasbro Ghostbusters Brand Team
We’ll begin by celebrating the iconic 1984 film. Tune in for ghostly surprises, classic toy news, and a visit from a very special guest: Ernie Hudson, otherwise known as Winston Zeddemore from Ghostbusters! Get ready to hear him answer your fan questions!
Part 2: The Making of Kenner The Real Ghostbusters Toys
Panelists: Mark Boudreaux, Hasbro Ghostbusters Brand Team
We’ll continue our journey through the 80’s with an inside look at the making of the Real Ghostbusters toys from original Kenner toy designer, Mark Boudreaux. Next, you’ll see behind the scenes of sculpting with Dave. Finally, meet the Hasbro team that relaunched the Kenner Real Ghostbusters toys in 2020. Hear about how they answered the call to bring this beloved toy line back for the fans and be the first to see the next Kenner Real Ghostbusters toy to hit shelves!
Part 3: Ghostbusters Afterlife
Panelists: Jason Reitman, Hasbro Ghostbusters Brand Team
We’ll end our celebration with a nod to the future… the new Ghostbusters Afterlife feature film, coming to theaters in March 2021. Academy Award-nominated, Golden Globe-winning filmmaker Jason Reitman, director of Ghostbusters Afterlife, will take you on a tour of the Ecto-1 that was used in the new film. He’ll end his tour with an exciting reveal! You’ll then hear from the Hasbro team about the next toy inspired by the Ghostbusters Afterlife film to hit shelves!
Posted By nwcomicgames at 6:28 AM