Monday's Headlines | Next D23 Expo Confirmed for 2022 by Disney

The Walt Disney Company's D23 Expo, the premiere fan event for Disney obsessives, will make its return in 2022 according to an official announcement. Disney confirmed the news online revealing that the "next" D23 Expo will be held from September 9 to 11, 2022 at the Anaheim Convention Center.
Their statement reads, "D23 Expo 2022 will be a celebration unlike any other, as we give fans a first look at the incredible plans for the 100th anniversary of The Walt Disney Company." The centennial celebration of the company will kick off in 2023. Prior to this announcement it was unclear when the event would return. 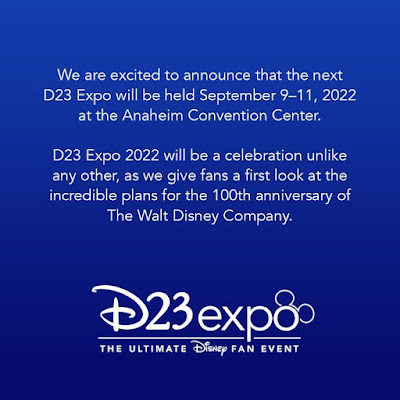 The 2022 dates for D23 Expo might come as a surprise to Disney fans as it will mark three years since the last event. Started in 2009, the D23 Expo has traditionally been held every other year, making the next event the first to be held in an even numbered year.
The 2022 D23 Expo will arrive just weeks after the next Star Wars Celebration, the other major Walt Disney Company convention, which was delayed from this year to August 18 to 21, 2022 due to the coroanvirus pandemic. Celebration 2022 will also be held at the Anaheim Convention Center.
Each D23 Expo has brought with it countless news and reveals from every corner of The Walt Disney company. From updates on new theme park attractions and upgrades to older rides, D23 is the ultimate destination for Disney fans to learn about everything going on at the company.
Beyond the theme parks, D23 has also offered the television and film side of Disney to make headlines. The 2019 D23 Expo saw Marvel Studios offer brand new details on their slate of original shows coming to Disney+, plus Walt Disney Animation Studios debuted extended looks at films that were still on the horizon at the time like Frozen II and Onward while officially announcing Raya and the Last Dragon.
Lucasfilm was also present, debuting a behind-the-scenes video for Star Wars: The Rise of Skywalker. Last year's event also marked the first time that the 20th Century Fox studios and properties were a part of the celebration as the acquisition between the two companies was completed by that time.
Posted By nwcomicgames at 4:54 PM