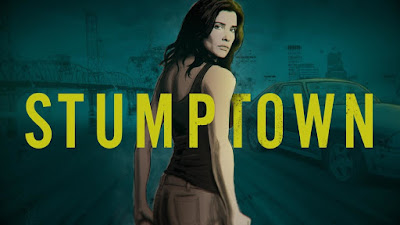 On Wednesday, ABC announced they were cancelling Stumptown after just one season, surprising fans of the series as the network had renewed the series back in May and even as late as July there had been updates, including the announcement of a new co-showrunner, Monica Owusu-Breen.

Reports of the series' cancellation cited the show being unable to resume production in a timely fashion in terms of scheduling due to COVID-19, but that reason isn't sitting well with fans. Soon after the cancellation announcement, fans took to social media to share their anger at the news.

Stumptown debuted last fall as part of the 2019-2020 television series and starred Cobie Smulders as Dex Parios, a strong, assertive and sharp-witted veteran with a complicated love life, gambling debt and a brother to take care of in Portland, Oregon. Her military intelligence skills make her a great PI, but her unapologetic style puts her in the firing line of hardcore criminals and not quite in alliance with the police.

Ahead of Stumptown's premiere last year, Smulders compared the training that went into her preparation for Stumptown to that of her work in other comic book inspired projects -- specifically the Avengers movies.

"It's always fun to do a job where you get to learn new skills," Smulders said. "We had an amazing team do the pilot and will continue to do great sequences. I think the thing that's very exciting about this show is, my character is not a superhero. She's not really skilled but she's a scrapper, and the fights we're going to see throughout the show are going to be really dirty and really grounded and very realistic. I'm a woman and I'm going to come up against men who are a hundred pounds heavier than I am, so it's finding ways to even out the playing field. That's been really cool to choreograph and get into.

"There's much more [hands-on training] on this because in all the Marvel stuff, Maria Hill has the power of the Bluetooth. She's got them on speed dial but she's not going after anybody. So, the training on this is much more intense."

At this point, not all hope is lost for Stumptown and its fans. The critically acclaimed series will reportedly be shopped around to other outlets, but for now, fans are very upset about losing a show that many called the one bright spot in what has been an otherwise pretty bleak year.