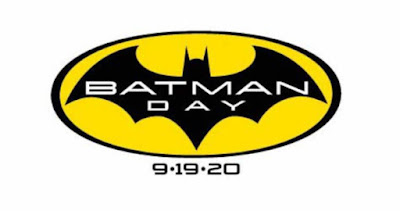 DC has confirmed that Batman Day will return once again on the third Saturday in September - September 19, 2020, to be exact.

In light of the COVID-19 pandemic, this year's Batman Day festivities are primarily those you can do while social distancing.

"The Batman Virtual Run allows participants to run their own race during the day or under the darkness of night (but with reflective gear for safety!)," reads DC's description. "Registered participants will receive an exclusive collection of Batman-branded gear, including a premium quarter-zip pullover, finisher’s medal, cap, and more."

Injustice 2 Mobile will have new Batman Areas, as well as a special Classic Batman Invasion Event. Users will also be given a free Batman Day gift, and there will be sales on various in-game chests and bundles.

Over in DC Legends, September 19 will have a special Batman Day-themed sale - as well as a "special treat."

DC is also organizing an online mystery of sorts, which will begin on Twitter the day before Batman Day.

"Fans can also team up with Batman to protect Gotham City in a series of digital activities, such as joining the celebration on social media and helping Batman to piece together a series of clues left behind by the Riddler," reads DC's announcement. "If you can decode these mischievous hints, you'll unlock exclusive, limited-time reveals! The adventure begins when the virtual Bat-Signal lights up at 12PM PT, September 18, on the @DCComics Twitter."

The HBO Max streaming service's DC brand hub will be re-branded with a Batman 'takeover' September 18 and 19.

Retailers such as Walmart, Target, Amazon, Hot Topic, and more will have special 'Batman Day' themed displays as well. New products from LEGO, SpinMaster, and Funko will be rolled out for the event as well.
Posted By nwcomicgames at 6:01 AM